The key differences between the Lynx R1 vs HoloLens 2 we will cover are:

Read the difference between the reality definitions here: What’s the Difference Between Virtual Reality, Augmented Reality and Mixed Reality?

As the introduction eludes, the two headsets are in different ‘Reality’-categories. Where the Microsoft HoloLens 2 is an augmented reality headset blending the digital with the physical, Lynx R1 is a virtual reality headset that encloses the wearer into a fully immersive digital experience. 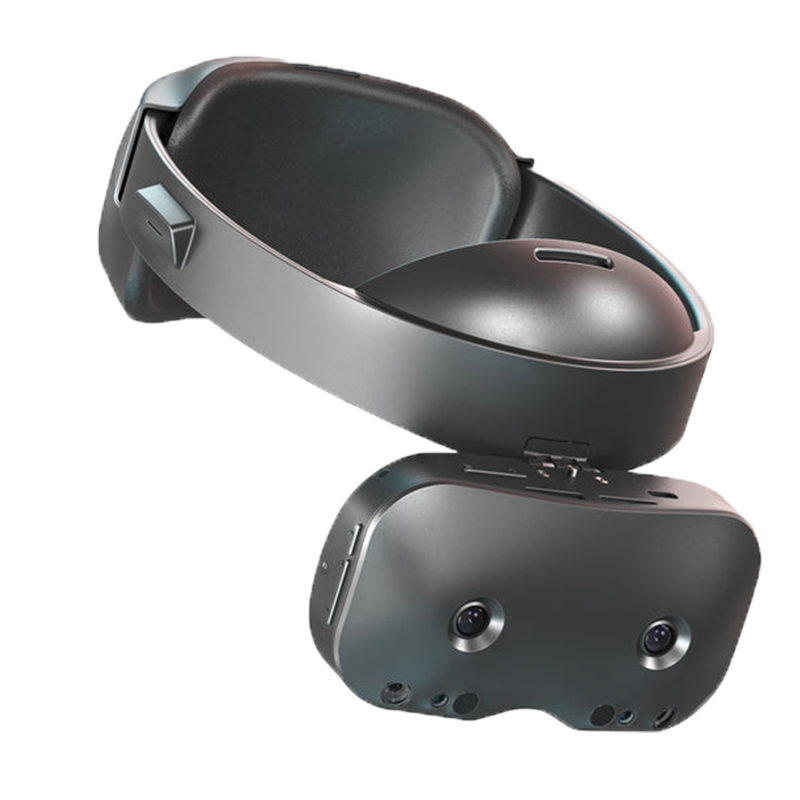 Along with the VR functionality the Lynx R1 is also mixed reality capable thanks to its dual camera video passthrough setup, meaning the wearer can see the world through a camera feed with the headset displaying digital objects on top. Therefore, there are some overlaps between the two headsets: the HoloLens 2 is a more capable AR headset, while the MR of the Lynx R1 is in addition to its core virtual reality functionality.

Tracking of the Lynx R1 vs HoloLens 2

The main functionality of the HoloLens 2 is to 3D map the environment which allows it to provide reliable hand tracking. As a result, the Microsoft HoloLens 2 headset is totally controlled through native hand tracking. In comparison, the Lynx R1 features hand tracking from Ultraleap and dual Lynx R1 Controllers with 6 degrees of freedom. However, HoloLens 2 has an integrated depth sensor able to deliver spatial tracking, allowing you to integrate 3D objects in the real world. Oppositely, Lynx R1 uses optical recognition and Ultraleap software computation to track hand movements.

The core philosophy of Lynx R1 is privacy and ownership of the user’s data. This means the R1’s operating system is built on Android 10, enabling easy software development and sideloading onto the headset.   Furthermore, Lynx R1 enterprise version offers full control and extraction of raw data for businesses. However, this also means the App store is not filled with many applications and still need to be developed. Oppositely, Microsoft HoloLens 2’s OS is Microsoft Holographic, an OS harder to develop customized software but offers a suite of elaborate productivity applications Microsoft offers, like Teams and Microsoft 365.

Processor of the Lynx R1 vs HoloLens 2

As there is a three-year release gap between Lynx R1 and Microsoft HoloLens 2 means their processing power differs. As is the industry standard, R1 uses the Qualcomm Snapdragon XR2 infrastructure with the newer Kryo 585 processor. Oppositely HoloLens 2 uses the older Snapdragon 850 infrastructure with the prior Kryo 385 processor. Additionally, where Lynx R1 has 128 GB of storage with an expandable SD card slot and 6 GB RAM, Microsoft HoloLens 2 has 64 GB of storage with no SD card slot and 4 GB RAM. This means Lynx R1 can run heavier applications and run future software more readily.

Microsoft HoloLens 2 is a premium augmented reality headset, with a field of view of 43° horizontal following the constraints from its waveguide optics. Oppositely, Lynx R1 is a VR and MR headset. This means the R1 delivers an enclosed immersive experience with a custom free-form, 4-fold catadioptric lens stack providing a 90° horizontal FOV.