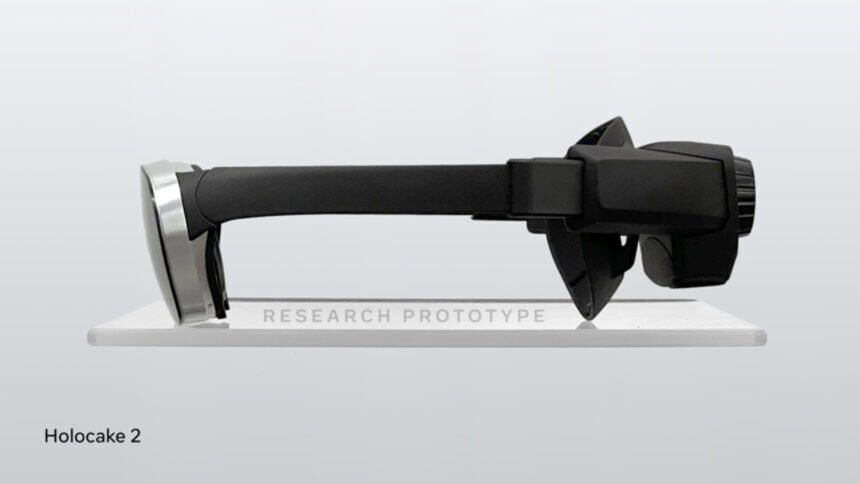 Meta (former Facebook) has revealed what they have been tinkering with for the future of mixed reality. What is revealed is the mind-boggling conceptual headset: Mirror Lake. The headset will combine optics from virtual and augmented reality achieving a completely new type of mixed reality experience, and offer a unique reverse video passthrough solution.

What is Mirror Lake?

The virtual and augmented reality roadmap for Meta is extensive with its technological R&D funneling into futuristic mixed reality headsets. One of them being Mirror Lake.

But to understand Mirror Lake, we need to cover the release pipeline for Meta. Meta is planning its foray into augmented reality by 2028. The first AR glass will be Project Hypernova, projected to release in 2024. Similar to the AR glasses from Magic Leap, Hypernova will externalize its processing to a separate device connected to the glasses.

Next is Project Nazare, acting as multiple AR glasses which are lighter and more advanced, offering complete augmented reality experiences.

The culmination of everything into Mirror Lake

The upcoming headsets show the commitment Meta has to virtual and augmented reality and the deep research inside Reality Labs. As Mark Zuckerberg says, “We’re not just refining the types of screens that we’ve had on phones or TVs or computer monitors for decades and that already exist. We have to explore new ground in how physical systems can work together and how our visual system perceives the world.”

Mirror Lake is an R&D conceptual headset, mixing Meta innovations developed in the last seven years. It is a small, lightweight, and energy-efficient device with impressive futuristic technologies. What is the Holocake 2 lens?

Meta’s Holocake 2 (the title picture above) is a research prototype combining the Pancake lens from virtual reality with the holographic waveguide in augmented reality. The result is a thin and light form factor, offering unparalleled mixed reality functionalities by using the Meta display technology called Half-Dome 3. A screen solution using liquid crystal lenses to dynamically change focus based on where the wearer looks.

Mirror Lake will have a display experience designed in layers that Meta calls the “Sandwich Principle”. This principle works by layering multiple screen technologies that interact to create a new mixed reality experience.

However, existing backlighting used in display engines does not function with this Sandwich Principle. Instead, lasers must be used to alight the display, which is not sufficient and mass producible. “We’ll need to do a lot of engineering to achieve a consumer viable laser that meets our specs — that’s safe, low-cost, and efficient and that can fit in a slim VR headset. As of today, the jury is still out on finding a suitable laser source” as Chief Researcher Abrash says during the Mirror Lake presentation.

Mirror Lake will also have a different take on eye tracking. Holographic foils will send the light differences from the wearer’s eyes into cameras located on the side of the headset. So rather than a set of cameras tracking the pupils of a person’s eyes; Mirror Lake tracks the changes of the eyes proper and beams them into cameras hidden away. This slims the headset and improves eye tracking for improved foveated rendering and video passthrough. 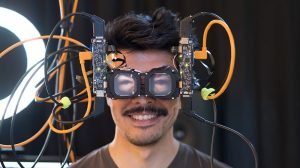 Reverse video passthrough is when someone outside the headset can see a realistic representation of the headset wearer’s eyes. And for mixed reality, reverse video passthrough is pivotal. Mirror Lake will use artificial intelligence to achieve this in what Meta calls “Neural Passthrough”. This works by using AI to correct the positions of the wearer’s eyes and display them on the outside of the Mirror Lake headset.

The R&D conceptual headset Mirror Lake is a culmination of everything Meta has learned in the last seven years about virtual and augmented reality. The headset shows the future of mixed reality from an impressive new optics technology combining the Pancake lens from virtual reality and holographic waveguide from augmented reality. Further enabling AI reverse video passthrough and improved eye tracking. This is just a taste of what Meta has in store for the future of mixed reality as they are set to reveal more insights into their research later this year. Exciting times ahead!