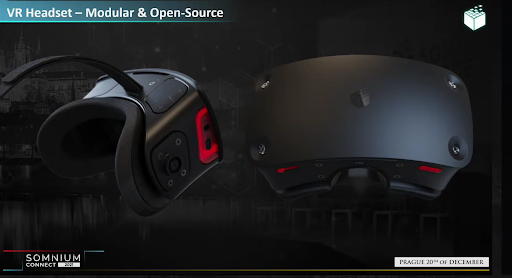 Somnium Space, the company behind the Social VR platform built upon the Ethereum blockchain, has teased the arrival of its open-source and modular VR headset during its first-ever Somnium Connect event on 21st December 2021.

Somnium had announced in its blog last year in October of 2021 that they are planning to launch a new VR headset.

The following specifications are known about the Somnium VR headset:

The company revealed that the headset would be powered by the Snapdragon XR2 processor, which is also found in the standalone Meta Quest 2

The VR headset will have a Wifi 6e connection for higher bandwidth and low latency. Additionally, the headset comes with a microSD card for extra storage, a headphone jack, and three USB ports

What makes the headset interesting is its modular design. For example, the front panel can be removed for other panels. Similarly, the sides and the bottom can be removed to add 3D-printed accessories, making it a fully customizable VR headset.

On this occasion, Artur Sychov, CEO of Somnium Space, said, “The reason why we are coming up with our own headset is because we are seeing a growing trend where companies are building VR headsets with a closed ecosystem, thus creating silos and full control over user experience and data.”

“We want to have a headset that will last some time with you, which you can take and do things with, which truly can be your companion and your development partner or your gaming partner.” 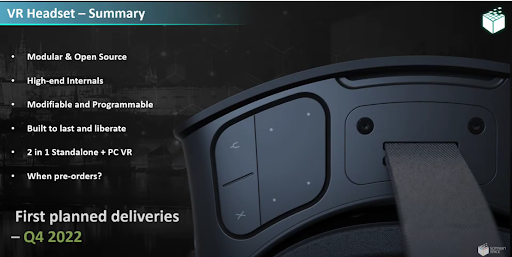 According to Arthur, the company has been working on the headset since the beginning of 2021 with VRengineers, and it still needs some iterations. He, however, mentioned that the company won’t be working on a pre-order marketing campaign and is hopeful of delivering the headset into the hands of consumers by Q4 of 2022.

The company didn’t officially announce the pricing of the headset. According to VRScout the headset could be priced at 899$.

With Somnium marketing their headgear as modular, the company hopes to improve not only the user experience but also cut costs while ensuring the product’s long-term viability.