The history of VR (Virtual Reality) [Last Updated 11-07-2022] Virtual reality has matured and become commonplace within the minds of people and businesses alike. Enterprises continuously find new ways of incorporating VR into their workflow and creation process with the ever-blending mesh of our reality mixed with the digital. In this article, you will read all about the history of VR and how virtual reality is developing.

The History and Timeline of VR

The VR timeline and historical beginnings reveal a technology formed from the pondering mind to a realized advanced technology transforming how we work, play, create and communicate.

VR Expert highlights this impressive lineage and will continually update it to chronicle when new milestones of VR transform how we live and how we work.

375 BCE : Virtual reality of the mind

The idea of virtual reality dates back to the ancient Greek philosopher Plato in 375 BCE. In his lauded work “the Republic,” he describes the famous allegory of The Cave, in which humans are chained to a chair, only able to see shadows cast on a wall by the world behind them. The idea is that the world we perceive is the shadows cast and not the real world behind us. The shadows themselves are the virtual reality we live in.

In 1838, the stereoscope was invented by Sir Charles Wheatstone, using twin mirrors to project a single 3D image. The 3D effect created from the stereoscope itself was from a separation between the right and the left eye perceiving the same image, or rather two semi-translucent pictures displayed on top of each other. The parallel images allowed the brain to combine the two images in the mind, creating a sense of depth.

Interestingly, this concept of showing different renditions of the same image to create a depth effect is behind the virtual reality technology we utilize today.

Wheatstone’s invention was followed by several other inventions that changed the history of virtual reality. For example, in 1851, Bereneville invented a device that was based on two mirrors and two lenses to help people see three-dimensional images. This eventually led to the development of photography in general. However, it did not gain much popularity simply because there wasn’t any high demand for it at that time.

Then in 1876, Paul Nipkow patented a disk-based method, as opposed to Wheatstone’s pictures, with each disk moving mechanically behind one another. Ultimately creating the same depth effect.
Essentially, the 1800s was the time when the precursor technologies were formed that would result in virtual reality HMDs.

The Link Trainer was created in 1929 by Edwin Albert Link and manufactured by Link Aviation Devices. It was known as either “Blue Box” or “Pilot Trainer” and was the first flight simulator made commercially available to pilots. The device was created to mimic the conditions of a plane in flight with a motor connected to a column providing accurate readings from turbulence and interference during take-off and landing.

Today onboarding and training in VR is a growing industry and novel solutions are created every day. Especially for the aviation industry with Edwin Link and it has been estimated that more than 500,000 pilots have trained using this physical rendition of ‘virtual’ reality.

Morton Heilig was an industrious creator. First, he invented and patented in 1962 a full-experience reality booth. Which, imagine stepping into a booth, sitting down and suddenly a cinematic experience is blasted into all your senses.

This was possible with the Sensorama system where users could witness everything from smells (projected from above) to vibrations in the floor below. Heilig thought of this as ‘the future of cinema’, marrying the screen with a theater experience.

It featured stereo speakers, a stereoscopic 3D display, blowing fans, and a scent generator. Furthermore, Morton Heilig also created six short films to accompany his invention, all of which he directed, filmed, and edited himself.

Additionally, Heilig invented the Telesphere Mask, which he claimed to be ‘the first example of a head-mounted display’ in history. The mask provided stereo 3D vision and a wide field of view. Critics say that this headset was not the first HMD in history, as it had no motion tracking.

1963: The first VR headset the Headsight

Only a year after Heilig’s HMD like invention, what is regarded as the first VR HMD was created. Two Philco Corporation engineers, created “the Headsight” which featured head tracking. The Headsight included a video screen for each eye, as well as a magnetic motion-tracking mechanism linked to a closed-circuit camera. The Headsight was not designed specifically for virtual reality purposes (the phrase “virtual reality” did not yet exist), but it did allow soldiers to see hazardous situations from afar while immersed in the experience.

Generally, the military both then and today are avid users of virtual reality both for decentralized fieldwork, and training and onboarding.

1965: The conceptualization of the VR display

Ivan Sutherland was the next in line on our inventor list. It first began in 1965 with what he would call “The Ultimate Display” being a blueprint and report of concepts still being utilized in today’s virtual reality headsets.

The impressive ingenuity of Sutherland and his student Bob Sproull came in 1968 with a physical prototype named “Sword of Damocles”.

Damocles was a hefty, mixed reality device that no one could bear to wear, so it was hung from the ceiling (hence its name). The reason for its weight was that the Sword of Damocles wasn’t connected to a camera – instead, it was linked to a computer. The user interface was clunky, the environment realistic and the virtual realm consisted of rudimentary wireframe rooms with simple graphics. However, it showed what was possible with the current technology.

Known as ‘the father of VR’, Jaron Lanier in 1982, founded VPL Research Inc. and released the EyePhone headgear worn with a DataGlove allowing physical interaction. 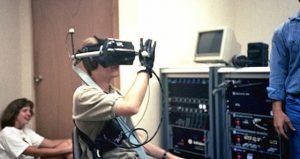 The entire system was called “Virtual Studio” and was used as part of a virtual environment known as the Electric Word Processor which enabled users to type text with their hands using two-way hand gestures.

This virtual environment, with the invention of the DataGlove and EyePhone, led to the development of the first virtual reality software used by the U.S. Army, called the ‘Land Warrior Program’.

In 1987 Jaron Lanier came up with and coined the term “virtual reality”. Interestingly, up until then, the industry and all the iterative technologies were nameless.

The Virtual Boy was a gaming system developed by Nintendo and announced in 1995, becoming the first-ever portable console displaying genuine three-dimensional pictures. The device was a commercial failure in both Japan and North America, having sold for $180, or $335 if released today. The failure was caused by the graphics not following the standards at the time. Ultimately, Nintendo discontinued its manufacturing and sale the following year, and the commercial industries shied away from virtual reality for 7 years. Luckey Palmer was the boy-inventor and engineer who would be the one to bring virtual reality into the 21st century with the Oculus Rift. “We were looking to raise $250,000 on Kickstarter, at least a couple of hundred, maybe a couple of thousand game developers – we ended up raising almost 10 times our goal: $2.5 million.”
–Luckey Palmer, Smithsonian Magazine

The successful Kickstarter campaign in 2012 for the Oculus Rift represented a clear divide between the past commercial failures in the 80s and 90s, to today’s VR revolution.

Enterprises, furthermore, took notice of the maturing technology, but it wasn’t until its purchase that the ball started rolling. 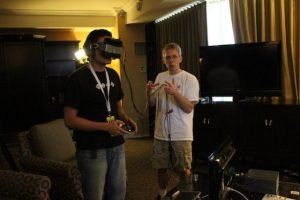 2014: One of the pivotal years for virtual reality

After Mark Zuckerberg tried Palmer’s Oculus Rift for the first time, he said it was “one of the coolest things I’ve ever seen.” Zuckerberg and Palmer didn’t imagine VR in the gaming industry, they reimagined it into all the industries.

Virtual reality initially began in gaming. But Palmer and Zuckerberg recognized that leisure, healthcare, mental care, design and R&D, training and onboarding, marketing and advertising, and many more areas would be revolutionized by virtual reality as its backbone.

After Mark Zuckerberg uttered his praise, he bought Oculus Rift for over $2bn in 2014, officially turning virtual reality away from conceptual prototypes and the gaming industry and into the mainstream.

Google reacted quickly with Google Cardboard. A cost-efficient and quick virtual reality solution. The headset was a cardboard box with lenses that folded together to store a smartphone creating a simple virtual reality experience. It broadened VR and had more people than ever try it.

At the same time, Samsung counter-reacted and released Samsung Gear VR. A VR solution that conceptually acted as the same as Google Cardboard, but rather than a foldable box, it was a plastic headset to slot in one’s phone. Slightly more costly than Google Cardboard but still a cost-efficient VR experience. Samsung and Google’s solutions were dubbed Mobile VR. 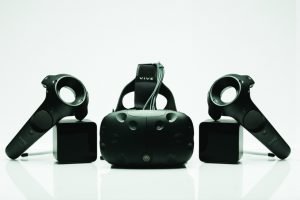 2016: HTC enters the game with outside in tracking

Facebook’s acquisition of Oculus enabled numerous players to enter the virtual reality industry. Existing technology manufacturers like HTC realized the potential of VR from the substantial investment and established themselves quickly in a partnership with Valve Corporation with the HTC VIVE SteamVR headset.

The HTC VIVE acted as the first virtual reality headset, tracking the wearer from external infrared sensors, meaning that users could move around in a designated area to play or design: outside-in tracking known as ‘the lighthouse system’.

Quickly, virtual reality changed into two categories: standalone (free with limitations) and tethered (constrained with fidelity). The Oculus Go and Oculus Quest against the HTC VIVE.

Mobile VR was phased out as the market was not big enough. Consumers that would have purchased Mobile VR instead opted for a standalone headset. Something that was exacerbated with Facebook subsidizing their headsets to decrease the headsets’ prices, increasing adoption.

After the adoption of VR became mainstream in 2018, Oculus RIFT S became the first, best-selling VR headset that made inside-out tracking popular, growing the VR market and fueling the belief in the industry and its technology.

2020: Building on a winning formula

If it isn’t broken, don’t fix it. In 2020, Facebook released an updated and better Oculus Quest called Quest 2, perfecting an already compelling VR headset. The result was that the Quest 2 became, and still is, the best-selling virtual reality headset in history. Again, because of Facebook’s (now Meta’s) subsidizing of the headset, decreasing its asking price, offering an incredibly compelling VR purchase. Consumers who didn’t adopt VR before 2020 now had the superior Quest 2 as the hard-to-beat VR choice.

The future: Thin and light extended reality in the metaverse

With the support of the new Pancake lens enabling a slimmer, lighter, and sleeker form factor, virtual reality is entering into the era of thin, lightweight, and powerful VR HMDs.

The  HTC Vive FLOW positioning itself with style, portability, and meditation is the beginning of this surge. The current prototype of Meta’s ‘Project Cambria’ is another indication of this rise.

At the same time, we will witness increasingly innovative renditions of extended reality from companies. Both discovering new use cases, optimizing workflows, and improving processes, like what Phario, the Japanese car design company did in the combination between virtual and augmented reality.

Furthermore, we will see workers excel in the blend between the real and the digital. This holds both for front-line industrial workers with assisted reality glasses, and seamless, integrated work views in the office for creating, meeting, and otherwise.

Finally, the metaverse will form as more development dollars are allocated to it.

The metaverse is a second, digital world – or embodied 3D internet – that will transform industries in ways yet to be fully predicted. But digital transportation, interior design, advertising engagement, and general socializing are some of the many areas industries must prepare to avoid being left behind.