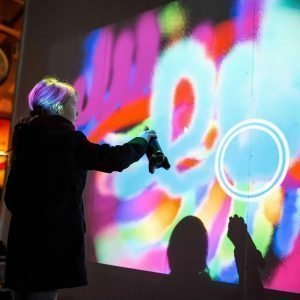 The Film & Media Festival (FMF) Alkmaar was held at three locations this year with a program entirely devoted to film and media art and the latest technological developments. The organization of the festival wanted to offer visitors an experience that would fit exactly with this picture. The AR Graffiti Wall was used for this.

For a film festival it is a beautiful decoration, at the same time it is nice and interactive.

With the AR Graffiti Wall it is possible to spray virtual graffiti on every wall. No paint is needed, because you spray with light. A physical menu made it easy to switch between colors. Visitors to the event were able to let their creativity run free. The space where the installation was placed was filled with color and special creations.

The AR Graffiti Wall was a good addition to the festival. Not only because it created a lot of interaction where visitors could create something themselves. But also because the AR Graffiti Wall combined art and technology. “It’s like a chalkboard, but in the year 2019: with beautiful colors and of course the new technology” Nina Bakker of Film & Media Festival Alkmaar said.