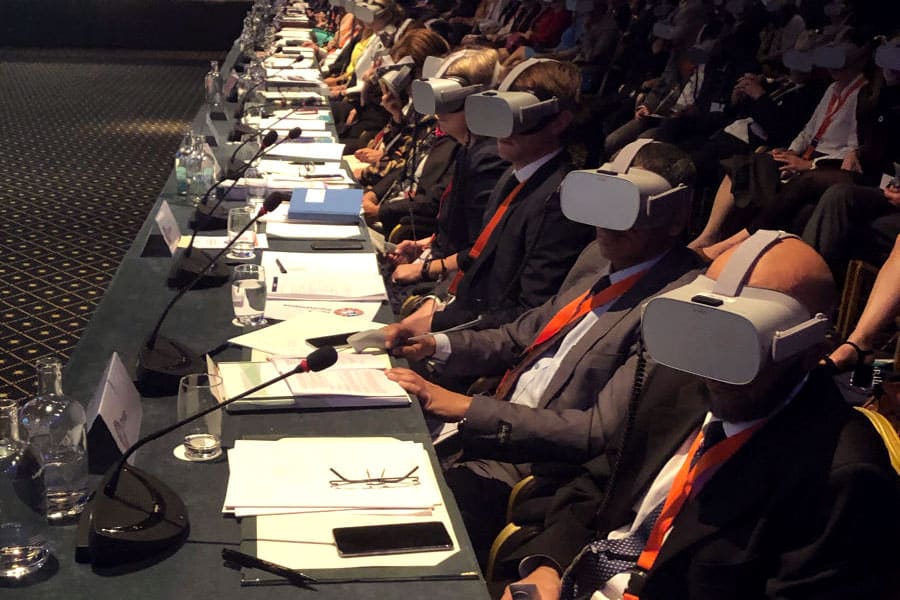 The Ministry of Health, Welfare & Sport (VWS) in collaboration with the World Health Organization (WHO) organized a conference on antimicrobial resistance (AMR) on 19 June. During this conference, the Ministry of Health, Welfare and Sport informed other ministers, but also stakeholders and state secretaries about AMR and the progress of the previously drawn up action plan to prevent AMR. This progress was visualized by means of VR.

The customer did not have to worry about the hardware and software, but could focus on the conference itself.

The 360 ​​° videos were created by Scenarios4Summits and were shown to all attendees simultaneously with the help of VR Sync. Our team ensured that 225 Oculus Go’s were installed prior to the conference. In this way VR experience could start right from the start. A VR Sync box was also installed on site to ensure that the internet connection remained stable.

A total of four videos were shown during the conference. These were played synchronously on all VR headsets, but also on a large screen. This allowed the video to be viewed without a VR headset. Our event team, consisting of five specialists, were present during the conference to provide support. She also made sure that VR headsets were charged and ready to use again between the videos.

The conference was very successful, giving all those present a good idea of ​​the progress of the action plan to prevent AMR. The videos were informative and the VR section went smoothly with the addition of VR Sync. The customer did not have to worry about the hardware and the software, so they could focus on the conference itself.